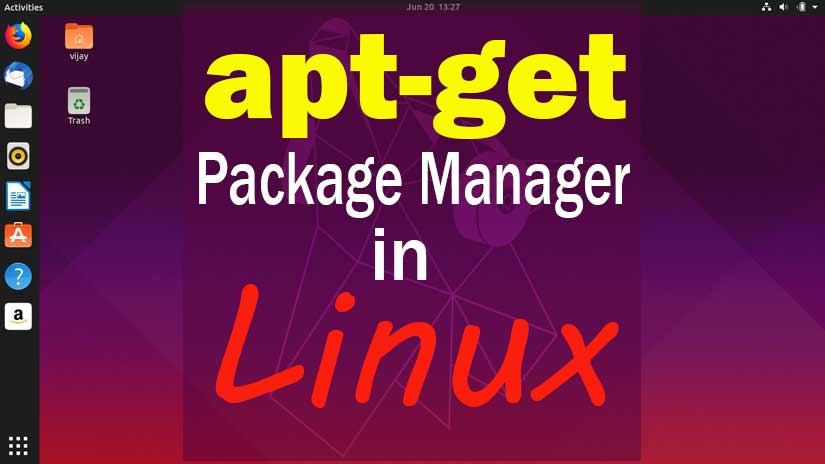 Do you know about computer software?

Yes, I know the computer, It is the combination of the Software and Hardware but I am talking here software or tools which are installed inside the operating system no matter, OS is window Mac or Linux.

There are lots of the methods used to manage packages inside Linux. the apt-get method is one of them.

Apt-get is a package manager used to manage packages inside the debian-based operating system, for example, Ubuntu, Kali Linux, Debian, and other debian-based distributions.

You will learn what is the use of apt-get command including, version, options, repository, update, upgrade, dist-upgrade, autoremove, install, uninstall, remove, purge, clean cache, autoclean, clean packages, search packages, search installed packages and more. The apt-get package manager is command-based utility and available for Debian based operating system only.

apt-get is a command-line, has many options like install, remove, update, upgrade and dist-upgrade, etc. Each and every option has a different use. If you want to see the complete list of options then use the following command

check the version of apt-get command by using following command

All the tested software are stored on the server and this is called repository.

Every server has its specific address this address is called source list. You must add this server list into the file /etc/apt/sources.list

I am using kali Linux and The entry of sources.list as following:

apt-get source command is used to download source code from the software developer’s official website. Most of the developers store their code on GitHub

Before to run command source you must add the source mentioned repository.

I am using Kali Linux and want to download the source code of rsync tool. So I run the following command

When you have completed adding repositories in sources.list file, your next step to update headers of repository list.

You can run the following commands to update Ubuntu.

You can see the result following:

Linux distributions are combination of the core system and software/tools. The core version is updated from time to time and gives a new name to the operating system. You can say it is a major update of any system.

In the upgrade process, system downloads the new version of tools available on system and it will install these new versions of tools in your system. The old version will be removed.

apt-get dist-upgrade command will upgrade the core system as well as a software system. Everything will we new on your system.

I was using Linux 2019.2, but the new version of Kali Linux had been released. I decided to update Kali Linux in new version as well as its software.

So I used the following command to upgrade the core version as well.

You can full upgrade by a single command

When you remove the package from Ubuntu, Debian or other Linux system, the dependency package will not remove. It will stay in your Linux system.

When you will run apt-get autoremove command, it will remove unused packages from your computer including dependency and old package. These old packages are not usable anymore when the new package is installed on your computer.

When you upgrade system then apt-get dist-upgrade package installs new packages and old package stay in your system as well.

So don’t forget apt-get autoremove command after upgrading your debian based distribution including Ubuntu, Kali Linux, and Debian.

In the case of sudo user command will be as follow.

the apt-get install command is used to install new packages on your debian based distribution.

I am going to install acheck on my Kali Linux system

After installation, you can see, acheck command is working fine, I am going to see the version of acheck.

If you are facing any problem with package then you can reinstall it and fix it.

apt-get reinstall option will remove packages completely from your computer first then it will reinstall the same package again. Remember, the packages that depend on it will not be removed.

In short, it removes the package but not dependencies and again reinstalls the package. If you think installed package is not working properly, you can use this apt-get reinstall command.

The complete command is looking as following

apt-get command is used to remove the package. This command removes only package. It doesn’t remove configuration packages and dependency packages

I have installed acheck some time before now I am going to remove it. You can use the following command to remove the pakcage.

When you use apt-get purge command to remove package it will uninstall the package with configuration file and other data.

When you use a command to install the package, The command will download the package in the cache first. Later this package will be installed.

These files stay on your computer whenever you will not remove manually. So keep in mind you should clean cache after installing package. This command can be used from time to time to clean the cache.

You can clean cache by using the following command.

I run du command to check the size of directories after running apt-get autoclean command. The directories sizes are as below:

Again I checked the file size it was as below. You can do this practice by yourself.

autoclean option is similar to clean, It erases the retrieved packages. But the main difference is that this command only removes those packages no longer to be downloaded or largely useless.

This allows a cache to be maintained over a long period without it growing out of control.

Run the following the command and enjoy

apt search command is used to search for available pakage on the repository. For Example, I want to install skype on Kali Linux, but I don’t know about its availability. So I will run search command for searching new package for installation.

For your kind information, this is not apt-get list command, If you want to display available list of particular package then you can run following command