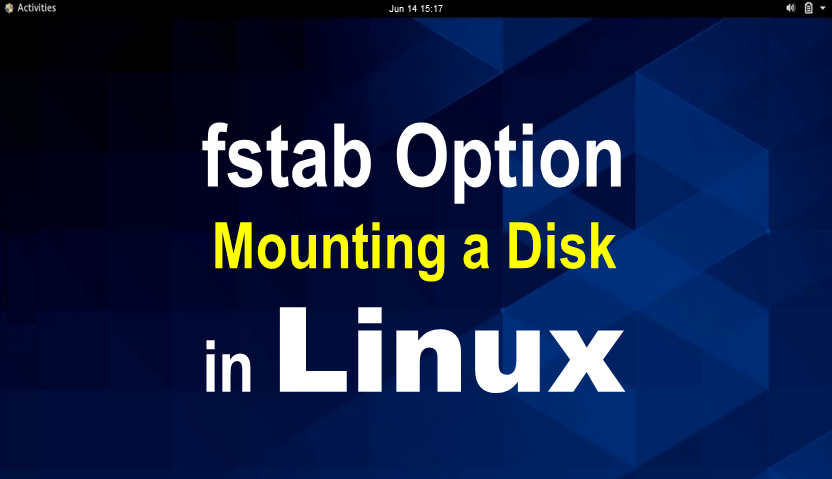 What is Mounting Disk in Linux

Mounting disk in Linux is actually a process to access a partitioned and formatted hard disk in the system. Whatever data is stored in a hard disk can only be accessed or used after mounting that hard disk in Linux Operating System. As we know when a pen drive is inserted in the USB slot of Windows system, the pen drive will automatically be available for access in the windows home folder. This is only due to “plug and play” options installed in Windows operating system. But, in Linux, inserting or connecting a hard disk in the system, is not enough to access that disk. Before accessing it, the hard disk has to partitioned, formatted followed by mounting it in the system. However, the hard disk can be mounted with any of the single or multiple folder of Linux system. There is no restriction of mounting location of that hard disk. The following diagram is explained the basic difference between inserting a hard disk in Linux and Windows operating system.

Requirement before Mounting Disk in Linux

A new hard disk can not be used with Linux system directly. Before using it, the following have to be ensured :-

To understand the procedure of partitioning and formatting of a hard disk, you can follow the blog “Fdisk command to create and delete partition in Linux“.

Use of fstab Option

What is fstab Option

Mounting a disk in any folder is being done by command “mount“, but such mounting is not permanent in nature. The mounted disk will automatically be unmounted after shutting down the system. When the system will reboot, the mounted disk will be disappeared. The disk must again be mounted for use or access. To avoid such process of mounting a disk again and again with every system boot, we have to mount the disk permanently. To make stable the mounting, fstab option should be used with some statement entry in “fstab” file is required. This “fstab” file is kept in /etc directory by default. Full form of “fstab” can be elaborated to understand as “File System Table”. In this file, a table of instructions for each permanently mounted hard disk is being maintained. If we read the file “fstab“, a table will be shown with some entry. The following diagram will be explained the line of instructions of this file :-

There will be six columns in the table of “fstab” file. Each column require specific entry related to the mounted disk.

The disk device will be denoted in this column with its name-id with absolute path or UUID (universal Unique ID). The default location of each and every hard disk will be “/dev“

Name-id of a all the Hard Disk of a System

Name-id of a Particular Hard Disk of a System

Description : Very short particulars of the hard disk will be displayed. Even table heading will not be shown.

View Size of Hard Disk with its Partition

Description : A table of all the available hard disk tree with its partitions including name-id and size will be displayed.

UUID and File System of a Hard Disk

Description : UUID of all the hard disk with its name-id including File system information will be displayed.

This column is specified to denote the location of the mounted disk with absolute path. As we know, hard disk can be mounted any of the folder or sub folder of the system, the location with absolute path must be mentioned here during editing of “fstab” file. For mounting a hard disk in a system in multiple folders, the entry should be made separately for each folder. If the hard disk has mounted in “c1data” of “zivi” folder under “home” directory, then the path should be mentioned as “/home/zivi/c1data“.

This column is specified to denote file system of disk. File system, which has configured during formatting of the disk, can be seen with use of command “blkid“, already explained above under heading “UUID and File System of a Hard Disk”

This column is specified to denote various mount option including permissions etc. Generally, this is set as “default” by the system for normal user or normal use of disk. The mount option may be changed according to user requirement when a specific disk to be mounted for a specific type of job. Multiple mount options can also be used separated by commas.

This column is specified to denote file system check priority for fs checks regarding errors of partition at the time of system boot. File system check at the time system boot is good idea to keep disk update all time, but this process will be time consuming. It will take much time to ready a system for use after booting. Therefore, generally, the fs checks order set to zero (0) for no checking. However, priority for checking of disk can be set in order of numerical numbers such as 1, 2, 3 ….. onward.

Mounting a CD ROM in Linux

Mounting an ISO image in Linux

Description : the iso image file “centols8.iso” mounted in the folder “cos8” in the directory “mnt”

Description : After un-mounting the disk from “c1data” folder, the folder “profile” removed.

Mount a Hard Disk in Linux

Firstly, create a mounting mount in the folder “mnt” as “hdc1“. Then, use following command to mount the disk “sdc1” into the folder “hdc1” of “mnt” folder.

Description : The disk sdc1 mounted in the folder “hdc1” of “mnt” directory temporarily.

Use of fstab Option

Press “I” to insert/edit value in the file “fstab“. Make entry in last row of the table regarding value of “sdc1” disk as under

Press “Esc” button to quit edit option and entering command option. Then just press ” :wq” to save and quite the “vi” editor.

Now the entry of “sdc1” disk has been made in the file “fstab” in /etc and the said disk has permanently mounted in the system. After re-booting, the disk will not unmounted automatically as usual.

You can also visit at the following links to read more on Linux :-