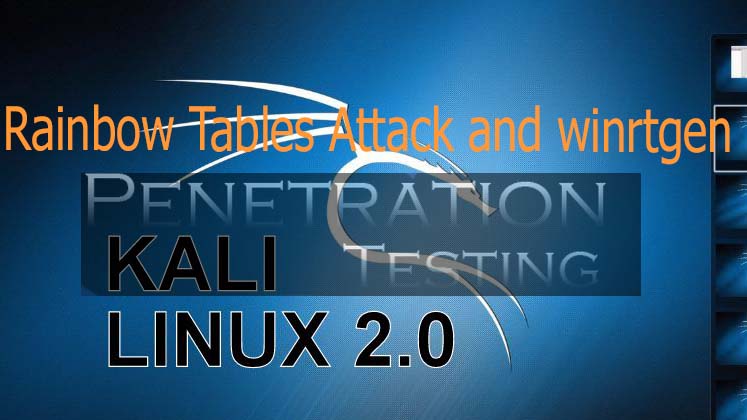 The Rainbow tables attack is one of the most favorite attacks for hackers to crack password easily. But getting a rainbow table on the internet as per your requirements is no easy task. In this article, one more interesting topic will cover (how to use winrtgen to generate a rainbow table)

In this article, I am going to tell you about another attack for cracking passwords called Rainbow tables attack and some time Cryptanalysis attack.  before performing attack we need to create rainbow tables help of winrtgen.

From Wikipedia: “A rainbow table is a precomputed table for reversing cryptographic hash functions, usually for cracking password hashes. Tables are usually used in recovering the plain text password, up to a certain length consisting of a limited set of characters. It is a practical example of a space-time trade off, using more computer processing time at the cost of less storage when calculating a hash on every attempt, or less processing time and more storage when compared to a simple lookup table with one entry per hash. Use of a key derivation function that employ a salt makes this attack infeasible. Rainbow tables attacks are a refinement of an earlier, simpler algorithm by Martin Hellman.”

How To Make A Rainbow Table using winrtgen?

There are many tools that create a rainbow table and there are many rainbow tables already available on the internet.Fortunately, Cain comes with a tool called winrtgen, which is located in its own folder in the installation.

After run winrtgen follow the instruction to create a rainbow table

Now you can use it to crack the password by performing a rainbow table attack.