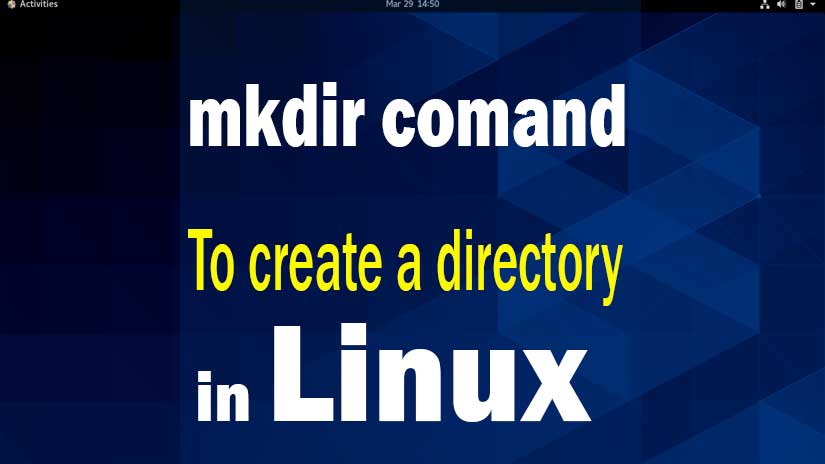 Making or Creating a Directory (Folder)

In detail, we can say the meaning of “mkdir” is to Make Directory.   When we need to make or create a new folder or directory at a certain location.

we have to use mkdir command followed by the name of the folder and location, It may an absolute path or relative path as applicable.

If you are interested in learning Ethical Hacking, you can visit at – How to use Rockyou Wordlist in Kali Linux

Practical Use of mkdir Command

Most used options with mkdir command

By default, ‘rwx rwx r-x’ (digit 775) permission applied for newly created folders with command “mkdir”.  But, if we want to set custom permission of read, write and execute for all kind users as well as groups, use of command “mkdir -m777” set to ‘rwx rwx rwx’ permission.

To see the permission label, we must use the command “stat foldername”.

Overview of Permissions in Linux

Let’s know, The type of permissions of folders and files, It is very important to learn deeply.

Basically, three digits after “-m” denotes owner, group and user of the concerned folder or file respectively.  And the numbers starting from zero to 7 denote the range of permission.

The fact is well explained in the undermentioned table.

Generally, if we use mkdir for creating a folder already exist, then an error will be shown as “mkdir: cannot create directory “foldername”: File exists”.  But if we use -p option with mkdir command, the error message will not be shown even the folder you want to create, already exists.  Also, the files and other sub-folders exists in the folder already created earlier, will not be removed.

When we need a confirmation from the system that the folder with exact name has been created, we can use this command.  This will help us to double confirm about the name of folder created, is correct.  This command is more useful when the name of folder is very critical and we need to re-check that the folder with correct name is created.  A confirmation under the following statement will be given by the system regarding creating the folder.

Use of this command will also create a folder in similar way as “mkdir”.

This command will render us the list of all accessible commands of “mkdir”.  After reading the note, we can better understand the command “mkdir” and its relevant uses.

This command will display the version history of command “mkdir”.

We can use -v and -p with a same line of command to create folder with sub-folders and also get confirmation from the system for each folder and sub folders.