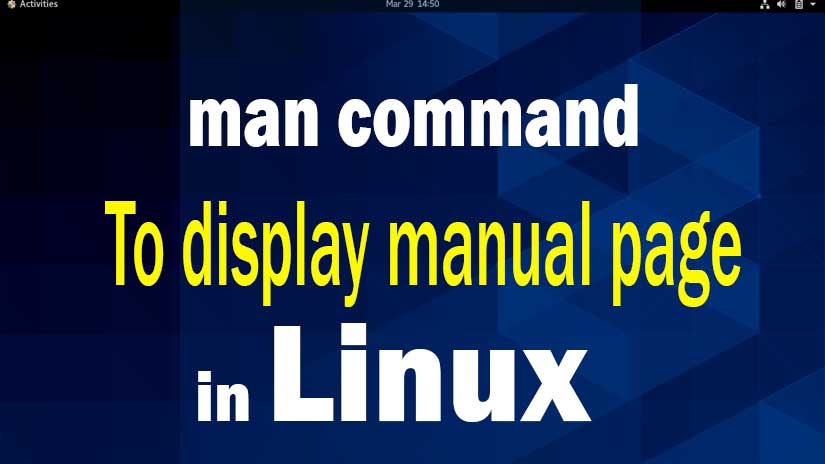 man command in linux is short form of manual of any tool, utility, and commands. man command is used to giving information and instruction of particular command. Instruction would be what are the possible way and option to use that command.

You will find very useful and essential command, which helps you explore other command as well as troubleshoot.

Most of manual has following sections:

The basic syntax of man command in Linux

The basic syntax of man command in Linux as follows:

For Example, if you want to know the instruction and information of touch command then you should use man touch. See the result follows:

Options of man command in Linux

In the above example I have described use command without option but as you know options allow commands to work on specific condition.

You can use following command the know available options:

I am giving you some examples of useful options of man command. You can find it in the following table:

Section-num of man command in Linux

As I have told you manual is divided into multiple sections, the section-num option can be used to display only a specific section of a manual.

Basic Syntax of man command with section-num option as follows :

An example is here with intro command:

You will get the 2nd section of manual page available for intro command, And section second is Description.

Basic syntax of -f option with man command is as follows:

In the above examples, the -f option are returned with it section numbers respectively mkdir, printf and ls command.

-a option of man command

-a option with man command is used to display, in succession, all of the available intro manual pages contained within the manual. It is possible to quit between successive displays or skip any of them.

This option helps us to display all the available intro manual pages in succession.

Basic Syntax of use man command to know about command name:

You can search the short descriptions and manual page names for the keyword mkdir as regular expression.

See example in below:

The command ‘mkdir‘ is searched in all the manual pages by considering it as a regular expression.

If you want to know the location of manual page inside your operating system. You use man command and displayed the information of same command. But you don’t “where is this manual page comming from?”

-w option of man command will allow you to get the location in which the manual page of a given command is present.

-I option of man command

It considers the command as case sensitive.

Basic Syntax of man command with -I option :

See the Example as below:

The explanation result is as follows:

The command ‘printf‘ is taken as case-sensitive i.e ‘printf‘ returns the manual pages but ‘printF‘ and ‘PRINTF’ gives error.

For more information about the man command, check the man page.

If you have any questions or feedback, feel free to leave a comment.