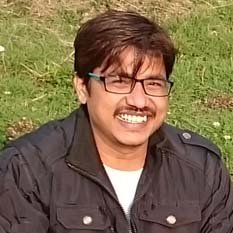 Hi, Warm Welcome on my short introduction page. I am glad you are checking here. I am cyber security researcher by passion and trainer by profession. I have conducted 100+ workshops and Training with reputed companies and colleges universities including IIT and NIIT in last four years.

I am also conducting online classes on Ethical hacking, Vulnerability assessment & Penetration Testing.  You can buy Self Paced Online Courses , You can join our Online Live Classes

If you want to connect me you can write me at [email protected] or visit website: https://www.cyberpratibha.com/

Vijay Kumar is an Experienced Freelance trainer for Ethical hacking & IT Technical courses example Ethical hacking, Vulnerability assessment, Penetration Testing, Linux (RHCSA, RHCE), Networking, CEH etc. Currently I am working as freelancer and conducting Seminars, Workshops and Training on respective courses. I started my journey as a Linux Trainer in Jetking Institute of Hardware and Networking. After completing one year successfully I wanted test of industries and switched my career as a Linux Server Administrator. I maintained this position successfully for 3 years but my hunger for knowledge make me enough skilled and I started working as Penetration Tester cum trainer in NSD (National Security Database) Interaction of students make me Free lancer trainer. I have been working as free lancer trainer since 2015.

My Journey of Being Ethical Hacking Trainer

I heard hacking word first time in 2006 when it comes out friend’s mouth. He told hacking is a crime and you can’t do it legally. it has happened because that time no more institution belongs to computer education.

He told me it is too costly, I could not afford. So dropped out this idea. Left plan of becoming a hacker. I started to pass life as usual. Eat, sleep and fun.

I reached Delhi in 2009, I got a job with very less payout. But I had to continue my job to start a career in the computer.

I joined a GT Hardware and Networking college and learned the following technology.

I didn’t have much interest in windows and networking, so I didn’t give more attention on windows.

I have an interest in Linux, It’s command-line interface attracted me. there is two reasons to have attachment to Linux:

I have been selected as a Linux trainer in jetking when I was doing a study of Linux. I was doing a job alongside to learn Linux.

I left job after two months due to no interest.

I joined an MNC company salient business solution as it resource person. I left job after 3 months because I didn’t have time to update my skills in Linux.

I joined job as a receptionist in a Grand Hotel Delhi, I thought “I will get enough free time but I was wrong” I left it after 1 month.

Finally, I got a job in Extramrks Pvt Ltd as a Linux System Administrator, I spent 3 years here.

I want to say thanks to Extramarks, where I had enough time to learn new skills alongside my work.

In 2012, I have created a YouTube channel named “Qhacker” and run till 2016 successfully. This channel had ethical hacking tutorials. I had more than 5000 views per day on my channel. It was terminated in 2016 due to hacking videos.

In 2014, I joined a job as Ethical hacking trainer and penetration testing trainer at Hitech institute of technology in Delhi affiliated by NSD (National Security Database).

In 2014, have created my first blog for making availability of hacking tutorials for students and promoting videos.

My first blog name was cyberpedia.in later I changed the domain to cyberpratibha.com It was one of the biggest mistake of my life to switch domain name.

In 2015, I left job from Hitech because I want to train more people in ethical hacking technology, because I knew hacking is legal, and condition of cyber security is very poor in India as well as worldwide.

I started to work as a freelance trainer for delivering workshops, training, in ethical hacking and Linux technology only and This is my current job as well.

Currently I am running my blog cyberpratibha.com and uploaded my course at cyrage.com