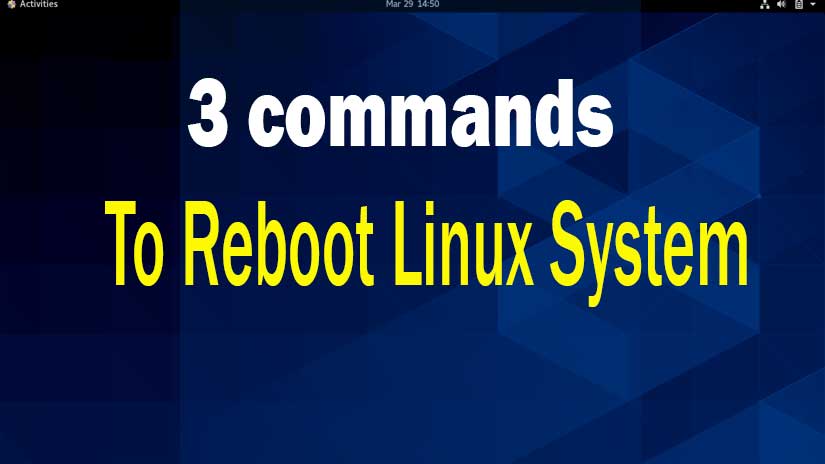 You don’t need to reboot a Linux server, they are not running only 2-3 weeks even years without interruption. Still, I am explaining the most popular commands to reboot Linux server and system.

If you are window user then you know simple way to reboot you system using graphical interface.

Linux is not one step back then windows operating system, It’s developer build up Linux with beautiful graphical interface.

So you can GUI to shutdown and reboot Linux without command line. Is it interesting? then read full article, I will share end of this article.

There are three most popular and useful command to reboot linux system, reboot command, shutdown, and init.

You can use these three command respectively to reboot the system.

Are you looking for just restart the linux system without going into any details? reboot command is very helpful at this situation. It is the easiest and quickest way to reboot linux system.

reboot command is used to restart or reboot the system. In a Linux system administration, You need to restart the Linux server in very rare conditions, for example after the completion of some network and other major updates.

You need to reboot Linux system because of changes after updation can be affected on the server.

For example, if the user is re-compiling the server’s kernel that is going through some more advanced server administration, then he needs to restart the machine in order to complete the compilation and to have a new updated kernel version on the server.

When Updating the server’s memory, IP allocation, NIC configuration are the key tasks that need to be done on the server restarted once leading to their successful implementation.

Most of the Linux system administrators are not working directly on the server, they have access to their servers via shell or SSH.

So if you are an administrator and want to perform a bunch of administrative activities, server management, and monitoring on the server, you first login on your system by using SSh server.

If you are restarting system through SSH server you must know the basic commands to restart the server from the shell.

You just help yourself by using any one of the following commands:

If your system is running through a normal user, you can use this command without sudo.

You can say a normal user can reboot without any problem.

Sometimes, your system is blocking from shutting down the process, perhaps due to a runaway process, then your single reboot command will not work.

you can use the –force flag to make the system shut down anyway. Because this option skips the actual shutting down process.

–force just an option is used to a forced system for shutting down, there are some other options can be used with the reboot command.

you can use man command or following command to display all available options.

Other commands to reboot Linux system

reboot command is popular but not a single command to reboot the Linux system, here are some other command can be used to complete this task.

You can use shutdown, and init commands as well.

I have described both command separately, so you can understand, very well.

The shutdown command basically used for power off the system or shutdown the machine. But you find several options to control exactly what you want.

For the example, If you want to reboot system by using shutdown command, then use -r option to reboot Linux mahine.

Use shutdown command followed by “-r now” to reboot system imediatly. The syntax will be as below:

Init term has been taken from the word initialize that is widely been used to initialize/start different processes in a Linux machine.

So you can use this command followed by runlevel 6. As you know, Linux Machine can understand 7 runlevels.

Different distributions can assign each mode uniquely, but generally, 0 initiates a halt state, and 6 initiates a reboot (the numbers in between denote states such as single-user mode, multi-user mode, a GUI prompt, and a text prompt).

So you will find runlevel 6 is useful for rebooting a Linux server.

The syntax for this is mentioned below:

In this case, The shutdown command is being used instead of reboot command to fulfill much more advance reboot and shutdown requirements. One of those situations is a scheduled restart.

Following is the syntax which is being used to reboot your system after time defines by the TIME.

Here the TIME has various formats. The simplest one is “now”, I have already told you in the previous section. You can use it restart the system immediately.

Other valid formats we have are +m, where m is the number of minutes we need to wait until restart and HH: MM which specifies the TIME in a 24hr clock.

If you want to reboot after 10 minutes then you can use following command:

If you want to schedule restart on specific time then use following syntax:

Cancelling Restart:
If you don’t want restart/shutdown system on sheduled time, you can use another shutdown command followed by –c option and broadcast with a message for the users about the cancellation of the sheduling restart.

The basic of canceling restart/shutdown as follows:

The scheduled reboot can be canceled by the system administrator by simply issuing another shutdown command with the –c option and an optional message argument.

If you are working as a system administrator, then you must know how to check reboot, login, logout records. You can find all logins and logouts records inside file /var/log/wtmp.

You can use cat command to see available records in the log file.

Below you can find the last command usage and syntax to display restart log.

You have learned about reboot command in Linux, which is used to reboot the Linux and Unix system and server. I have described about another commands including shutdown and init to reboot the system.

You can reboot Linux system remotely by using ssh server.

If you have any questions or feedback, feel free to leave a comment.