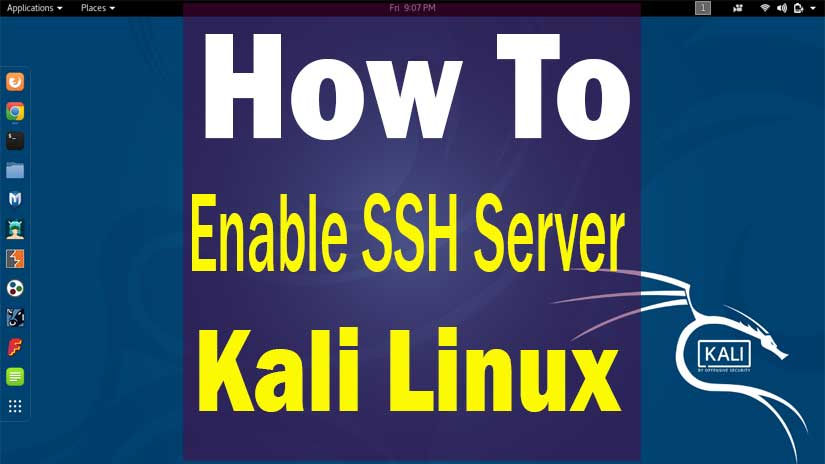 Kali Linux SSH server is installed by default. You must know How to Enable SSH on Kali Linux” If you want to use this service, you need to just start, stop and restart service to activate it.

As you know very well the Kali Linux operating system is used for penetration testing and Security auditing, by using it can transfer files secure with its clients. you can configure in Kali Linux easily.

What is Secure shell Server?

ssh stands for Secure Shell is a more secure method of accessing the file system of Kali Linux remotely. It makes a secure and encrypted communication channel between computers. With the help of a secure shell, the pen tester can transfer files that occur without being inspected by the network security tool for example IDS (Intrusion Detection System) IPS (Intrusion Prevention System).

scp command is used to transfer files over ssh server from one computer to another computer.

Encryption keys must be needed to create a secure and encrypted session between computers and use securely. The following command is used to generate these keys in Kali Linux.

The first move the original keys form their default directory into a new directory, however, don’t delete them.

The Secure Shell server is incorporated with the principle document structure of the Kali GUI and is got to in the same way that the Apache server is begun or ceased. To access the menu, select Applications from the bar at the highest point of the Kali screen. Starting from the drop that is exhibited select Kali Linux, an activity that will result in a submenu to be shown. From this menu select System Services, which will show an alternate menu, select the SSH alternative on the fly-out menu. This will show the choices to start, stop, and restart the SSH services.

Command Line is an easiest way to start stop and restart this service. to be performed, start, stop, or restart service by the following command

Another commands to start, stop or restart the services

When the configuration done and service is running on the Kali Linux System, the system can be accessed remotely from Linux system by entering following command

Do you want kali Linux remote access by Windows ssh clients? Yes you can do that but required an extra tool called putty that is available from http://www.putty.org

Thanks for reading full article, I hope you liked it. If yes then share on social media, if No, Please tell what would be added in this artcle by writing comment.