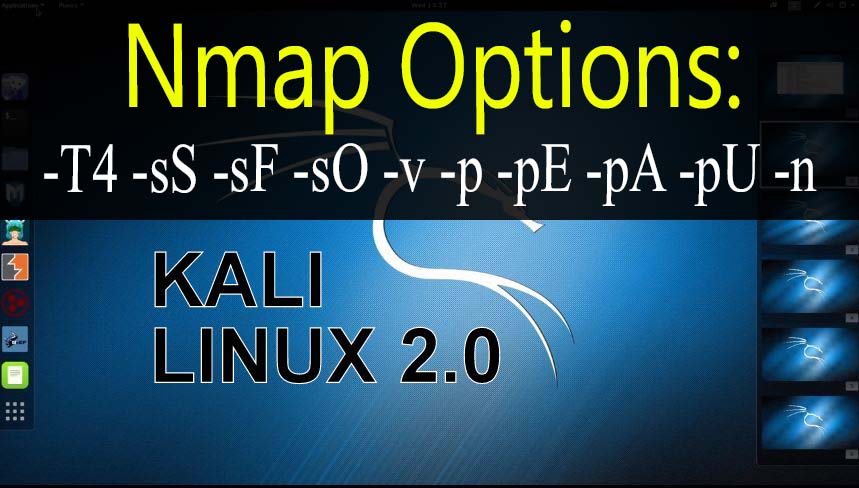 Today I am going to talk about 8 important Nmap commands in Kali Linux with Example after reading this article, you will be able to understand how to use namp commands and how to scan the network!. you can check another post related nmap 4 Examples of Network Scanning for Live Host by Kali Linux

Oh yes!  you are seeking what is switches?

It has lots of sub tools. that is excuted by using switch. Like if we are going to scan particular IP address and we run command nmap 192.168.56.102 (Target IP Address) It scan network through default options. When we specify any switch like nmap -v  the process will be verbose.

One more question how will you see available options?

It is very simple to run following command to see available options and how can you use them!

In scanning process, nmap sends packets to the target machine within the particular time period (interval). If you want to decrease or increase this time period then you can use nmap -T switch. but -T option required an attribute, means you should use 1,2,3,4 as per requirement T4 has fast speed then T1, T2 and T4.

It is required privilege access and identifies TCP ports. The TCP SYN Scan implements common method to identify open ports without completing Three way handshake process. When the open port is detected, the TCP handshake reset before completing. So this scanning also known as Half Open scanning.

FIN scan sends packet with FIN flag to the target machine, so these frames are unusual because the they sent to destination before completing Three way handshaking process. If the tcp session is not active,  it means that port is formally closed. If the particular port is closed on the target machine it reverse RST packet in the response of FIN Scan.

Nmap’s verbose mode provides the feature of obtaining additional detail in the scan output. The verbose mode doesn’t change what occurs during the scan, it only changes the amount of information that nmap displays on its output.

Nmap mostly used for scanning ports, by default it scans all ports but you can scan single, multiple or within range protocols.

Instead of using the default option of both an ICMP echo request and a TCP ACK, the –PA option sends a TCP ACK and forgoes any ICMP echo requests. This is a good alternative when the use of ICMP is not applicable because of packet filtering or firewalls.