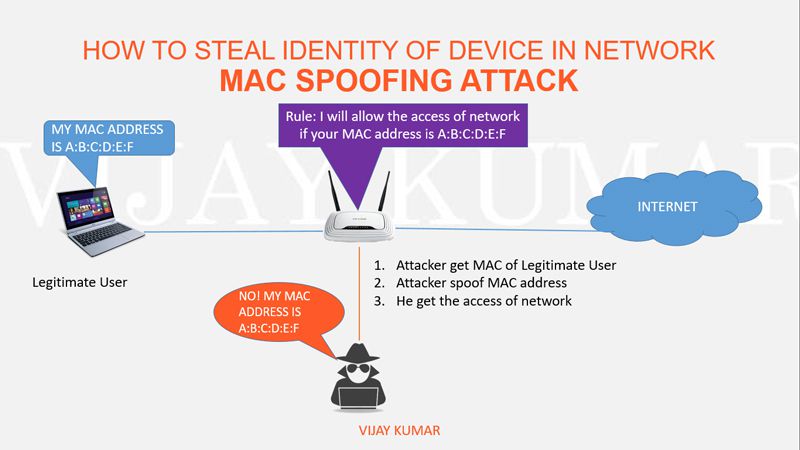 In this article you will learn how to change mac address by MAC spoofing in Windows and Linux (ubuntu and Kali Linux ) manually and by macchanger software.

MAC address is the unique identification of computers all over the world, and every device has been identified by its physical address in the network, It doesn’t matter network is local or public.

For your basic knowledge, I am telling you “When the data travel over the network it consists of MAC address value of destination device and source device as well”.

Some people want to hide their device in the network by using mac spoofing method. It totally depends on the people why he wants to hide? for bad or good intentions.

Why do you want to change mac?

I don’t know, But I suggest you use it for good work, not for bad. Illegal work doesn’t have a long life.

Step 2: Press Windows Key + X on the keyboard and click on network connections.

Step 3: Choose an adapter and right-click on it, then click on properties.

A new window will be popup, click on the Advanced tab

Check on Value and fill in the new MAC address value. and click on OK.

Now, the Ethernet adapter will be reset and take a little bit to come into effect. So check again MAC address by using the same command ipconfig /all

Note: This is temporary MAC spoofing so if you want to get your original Physical address just use the reverse process. If you are not able to get it again, write in a comment box.

MAC spoofing in Ubuntu by macchanger

You have seen in windows it is quite easy, but when you are going to change MAC address in Ubuntu or other Linux you need an extra utility called macchanger.

macchanger doesn’t exist in Ubuntu by default so you will have to install it first.

At the time of installation, it will ask about the running status of macchanger. Select yes for changing MAC address automatically to bring up network adapter otherwise select no. I suggest to select no so you can do it manually.

Note: Make sure your repository should be added and have active internet connection.

Step 2: Check the current MAC address: you can use the following commands to check the mac Address:

Here enp0s3 is the name of the adapter, this adapter name you can find by using $ifconfig command.

here AA:AA:AA:AA:AA:AA is the value of a new Address you can replace this value with a new MAC address whatever you want to assign. and enp0s3 is the name of the interface.

STEP 4: check again mac spoofing is done or not.

Whenever I write an article about doing some fun with Linux, I never forget Kali Linux, because it is the most used Operating System by me. So I am going to tell you about mac spoofing in Kali Linux.

macchanger utility is installed in Kali Linux by default, so you don’t need anymore to install it. and you can follow the same commands to check the mac address and change MAC address easily.

If you have still any questions related to mac changing, macchanger or mac spoofing, Please write in a comment box below.