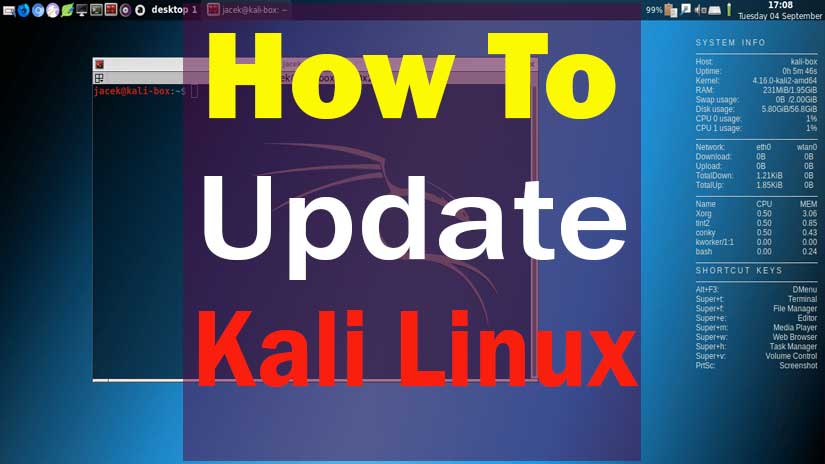 A new version of Kali Linux has been released on 9th August 2022 with new attractive tools and bug fixes. The major release of Kali Linux version 2022 and the minor is Kali Linux 2022.3.

This is the first release of the year 2020 with non-root kali Linux so, if you are using kali Linux live then the username and password root/toor will not work.

If you have an old version then you can update kali Linux by using the following command. If you will face any errors then read the complete article.

Lots of vulnerabilities and patches are released every day, so you need to update Kali Linux regularly.

I have created a video to cover update and upgrade of kali Linux in Hindi Language. If you are good to understand Hindi then this video sure will be helpful for you

A repository is a place where all the updated tools and utilities are stored. There are multiple Kali Linux repositories available worldwide. the tools available on repositories are tested and maintained by the offensive security team.

You must make the repositories server entry inside the file /etc/apt/sources.list

First, open the file by using any text editor, I am using leafpad text editor. It is preinstalled in Kali Linux.

Step 3: Save the file and exit.

For more details Visit How to Add Kali Linux repository

If you are going to update the Kali Linux in the latest version. Your first step, check the installed Kali Linux version.

If you don’t know how to check the kali Linux version, don’t worry, and follow the given steps to check it

the following command is useful to check the Kali Linux version.

In some cases, if lsb_release -a command is not working,  So it is not a big issue, because there are other methods and commands to check the Kali Linux version

I have an older version of Kali Linux 2022.1, running on my system and the newer version has been released. And I am always eager to learn new things and get new experiences. So I am going to update and upgrade Kali Linux to 2022.2

How to Update Kali Linux

Hey, my dear friend, Do you want to know how to update Kali Linux in the new version 2022.2 Newer version of Kali Linux has been released It is Kali Linux 2022.2.  The newer version fixes bugs and the latest kernel, and latest tools, and sometimes adds new tools. In the update, the advanced package tool (APT)  fetched headers data of available tools on the repository and saved it into a local drive.

You can use the following command to update the Kali Linux.

$ sudo apt-get update (This command is only for sudo user)

What does update mean in Kali Linux?

When you run the update command it will fetch the information of available tools and their version from the repository and store it in the local computer.

Have a close look at the above result after running the update Kali Linux command. This command fetched only 17.4 MB of data from the repository.

#apt-get update command does not update a single tool.

If you want to install a newer version to tools / OS/ Other utility then you will have to run the upgrade and dist-upgrade command.

How to Upgrade Kali Linux

The upgrade is a process of removing the older version of tools from Kali Linux and installing a newer version.

If the installed tool has a similar version to the available tool on the repository, then it will not be upgraded.

When I run the above command then I found the result. I am going the share some lines with you.

These are the last 4 lines before starting up-gradation. 1015 tools will be upgraded and 179 will not be upgraded. 179 tools will remain the same.

1780 MB size of files will be downloaded, and 419 MB of additional disk space will be used.

If everything looks good press y and hit enter the up-gradation process will be completed.

How to Dist-upgrade Kali Linux

apt-get command followed by upgrade will only upgrade installed tools. This command will not touch the core system and its utility.

If you want to upgrade the core operating system as well as tools at the same time then you will have to run the following command.

You have seen all the points of running Kali Linux update, upgrade and dist-upgrade. If you install the Kali Linux first time then I suggest you run apt-get command followed by dist-upgrade.

After that, you can run the apt-get command with an update and upgrade switch.

Tech Tip : Now you can also access your windows apps and data on your Linux environment in a hassle-free way with Cloud Citrix VDI from CloudDesktopOnline. Learn more about Hosted SharePoint, Office 365 Enterprise E5 plan and QuickBooks Hosting by visiting Apps4Rent.