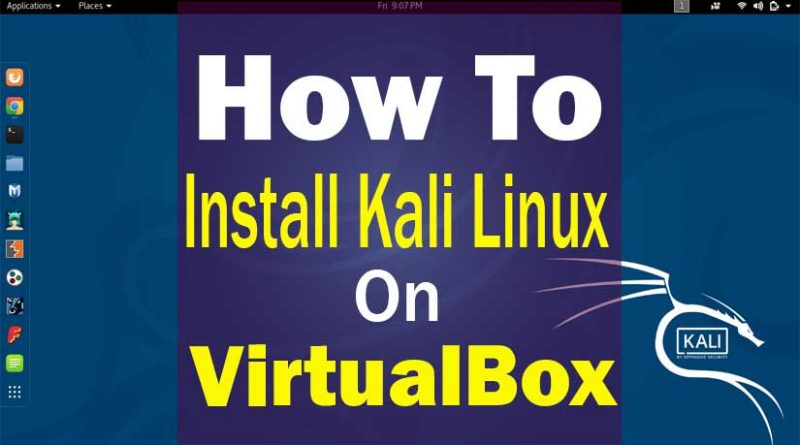 Are you a beginner in Kali Linux? And don’t know how to install Kali Linux on Vrituabbox / hard drive.

Don’t worry at all, you are the right place. Today I am going to share with you “How to install Kali Linux on VirtualBox“. Kali Linux VirtualBox is the best to setup home lab and practice as more as you can in Ethical hacking.

You can test it in live mode through DVD/Pendrive if you don’t want to install it on your computer. Yes, you can create a Kali Linux live DVD/ Pendrive for testing purpose.

If you want to use Kali Linux through Pendrive forever, Then you must create Kali Linux live persistence USB / Pendrive / Flash drive.

Kali Linux lives USB is good for you if you are using it for penetration testing only and having good command over it. because you can’t use it for testing, learning and practicing purpose.

You must create a virtual lab for learning and practicing purpose. if you are a new user of Kali Linux and want to explore it then you must install Kali Linux on Virtualbox / VMware.

Virtualbox is used to create a virtual machine inside the core operating system.

I think you are not a spoon-feeding person, So I am not going to explain each and every step for installing it

You can install it by double click on the downloaded executable file, and follow the steps prompted due to the installation process.

Complete Guide for “How to Install VirtualBox on Windows 10“

Create a VirtualBox for Kali Linux

What is a Virtual Machine?

Virtual Machine (VM) is a logical Machine inside computer works like a physical machine (Real Computer) it is created by using Virtualization Software like VirtualBox and VMware. Virtualbox is the best and free Software. We can create virtual machines for Windows, Linux, Mac and Other Operating Systems. When we create a Virtual machine, it is similar to a fresh computer (Without Operating System) It has most of the Hardware devices virtually like hard drive, DVD writer, LAN card, etc.

Yes, Of course, it is amazing because you are going to run a virtual computer inside your real computer. It means you can run multiple computers at the same time. Like Window 8, Window 10, Kali Linux, Ubuntu, and more. If you are looking at such type of interesting thing. Continue reading  …..

Why did I choose to Create a Virtual machine for Kali Linux?

How to create Virtual machine for Kali Linux:

If you are interested to learn new things like me then this tutorial useful for you. With the help of Virtual machines you can set up Virtual Lab inside a single Computer. First, we are going to create a Virtual Attacker machine (Kali Linux).

Before start creates a virtual Machine you need the following requirements.

Virtual Box should be installed on your system. If you don’t know how to install Virtualbox on Windows 10

Step 2: Click on the New. The new window will be pop up. In this window, you will find three options for filling Name, type & version.

Step3: Following things are to be filled:

Version: Debian 32 or 64 (according to system architecture)

Step 4: In the next window you need to set the virtual memory (RAM) of the machine.1024 MB size [Is enough] for Kali Linux. So assign 1024 MB size for RAM. Click on the Next button.

Step 6: Here you need to select the file type of hard drive[where your hard drive will be saved]Select VMDK(Virtual Machine Disk) recommended because this supports VMware. Then click on the Next button.

Step 7: Select “dynamically allocation”. By this option you can resize hard drive, later as per your requirement click on the Next button you will reach on the next step.

After the execution of the above  steps, your Virtual machine for Kali Linux is Ready. Now you can install kali Linux on VirtualBox.

1. Installed Virtual box  on your system.

Before starting to install you need to a little bit set in your virtual machine first.

3. Click on the CD icon on the right side of the CD/DVD drive: >choose a Virtual CD/DVD disk file >Click on it, a new window will be popup.

4. Give the path of Kali Linux DVD image After adding a virtual DVD in your Virtual Machine, It will ready to boot with Kali Linux live DVD.

Step 2: Start your Virtual Machine and boot with DVD by clicking on the start option available in the top menu of Virtual box. After it, you will be on the first screen of the virtual machine boot with DVD.

Step 3: Now here you have many choices for selection so select install or Graphical install (both are some only difference of graphic interface) my recommendation is select Graphical install. After pressing Enter installation will be started.

Step 4: Select your Language and Click Continue. Don’t select the language that you are speaking or native language.

Step 6: Select Keyboard type, By default, it is American English. Choose your respective keyboard type and click on Continue after it will take a little bit of time to install some components in your system.

Step 7: This screen asks you to provide a hostname (which will show in a network. It means your computer name . you can put any name whatever you like, you can leave it to default Kali.

If you don’t want to change it, leave it to the default hostname of Kali Linux.

You can consult with your network administrator to put the hostname.

Step 8: Domain name is the part of the internet address, you can provide the domain name if you are working in an organization which has a domain name.

If you don’t know about domain name then leave it blank. It will not raise a single problem.

Step 9: Setup a root user password, which will be required at the time of login on the Kali Linux system. You can set whatever you like.

Step 10: Setup your time Zone (which time zone belongs to you)

Step 11: Most important part of the installation is to setup partition if you are a new user and going to install Kali Linux in Virtual machine so Select the first option “Guided: Use entire disk”:

Note: if you are going to make your system duel boot don’t select the entire disk option by this your complete hard disk will be used by the Kali Linux system & you will lose you all data so be careful.

Step 12: your hard disk will show here select and Click on Continue.

Step 13: Select all files in one partition & Continue because this tutorial for new user and you are.

Step 15: Select Yes and Continue. Your installation will be started and it will take a little bit time wait

Step 17: In this step, you will be asked to install the GRUB boot loader on the hard disk. Select yes and Continue.

Going to finish installation and system will restart with Kali Linux Operating System.

By now, you have installed Kali Linux on VirtualBox successfully. When your installation process will be completed, click on continue. or reboot the system.

Your system will reboot and you will see the screen.

Please enter the username “root” and hit enter. Next window will be open, you will have to enter the password which you have set at the time of the installation process.

Offensive Security has generated and uploaded the latest and updated several Kali Linux VMware and VirtualBox images on its official page. They are not providing any type of technical support for contributed kali Linux images.

You are using VirtualBox for virtualization so download VirtualBox image from the given link below.

Note: Don’t Download Kali Linux VMware images if you are not using VMware.

I am happy to share with you “one-click install Kali Linux on Virtualbox”. Kali Linux’s new version 2017.1 has been released with new features. If you have an older version installed, you can update in a newer version How to update and upgrade Kali Linux to 2019.1 if you are not using before, you can install it on a virtual box and start exploring it.

Now we are one click away to install Kali Linux on Virtualbox, after downloading the VirtualBox image double click on Kali Linux 2019.1 -x-x.ova file. Virtualbox will be open with a new window called appliance settings.

Click on Import, and virtual machine settings will be imported. don’t go for coffee it will not take a long time.

So Kali Linux is ready to use on VirtualBox.

But on the other hand, if you have downloaded ISO image then move to the next step and install it.

How to install Kali Linux on VirtualBox Video Tutorial in Hindi

Hey, there Vijay Kumar! Welcome on my BLOG. I like to share tech stuffs with others. if you have any