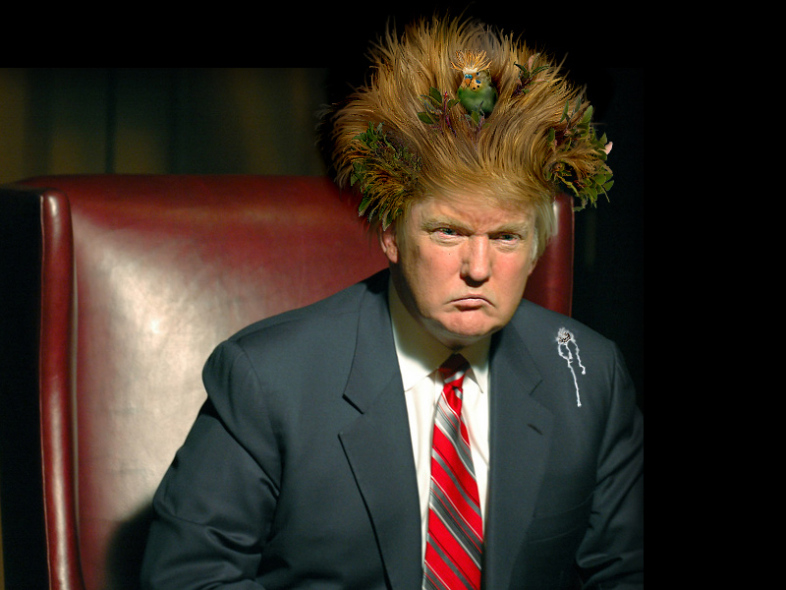 With way less hair, though!

(Be warned! The article is going to be crass as all hell!) So, let’s begin!

Fresh on the fiery campaign against the twats of ISIS, The cyber-shadow-keyboard ninjas are now going against the shit stain on the knickers of life. #DonaldFuckingTrump.

#OpTrump-A latest operation of the anonymous was just announced on the tiny ass window of youtube by a dude in the #GuyFawkes mask, speaking in the computer slang. That’s what cool kids call an artificial voice these days. He takes a shot at the “I will ban all Muslims” bullshit that spews out of the trumpet of trump on a regular basis. Saying that this attitude is actually what ISIS is looking for.”You ban them and they will take’em”. To elaborate, he said “The more radical behaviour of America against Muslims. The more sympathisers those dipshits of ISIS are going to get”.

They concluded with the same threat that now is so boring that I back off myself to say it. So let me re-iterate “Your ass is warned Trump. We are anonymous. We never forgive. You are a piece of horse****”. That’s just soo much better.

The real impact on the dipshit’s presidential campaign from the hacker collective is yet to be seen. Reuters reported some outages at the Trump Tower(of dicks). The trolling the trumpet of Trump began, but the site was fixed later.Really anonymous? Get your shit together! More is expected from you.

Gabrielle Coleman, a fine student from McGill university. Backed by her expertise in hackers and online activism, wasn’t the least bit astounded at the shit magnet Donald Trump is to hackers. “He is the biggest bully”, she said. “And bullies attract other bullies like anonymous”, she said.

Further, she said that the cyber collective isn’t going to take down his campaign but embarrass him. “They may hack into the twats’ headquarters and release some wrong doing or they may make him comment something. Anonymous’ unpredictability makes it hard to determine the groups’ success” she added.

Personally, I think anonymous should eff him up! I mean come on, the guy looks like a potato with a poor excuse of hair glued on his head. That being said, trolling the trumpet of Donald trump is an amazing feeling to be had on Christmas.